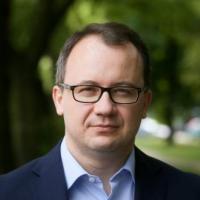 September 21, 2015
CEU alumnus Adam Bodnar (LEGS ’01) was elected Ombudsman by a vote of the Polish Parliament in July 2015. After the Senate confirmed his appointment, Bodnar took office on September 9. According to Polska Newsweek, he will serve as “the vanguard of change, warn politicians against potential risks to individual rights, and criticize when they take actions that threaten them.”