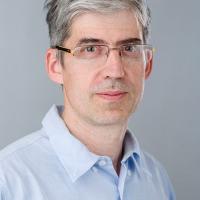 September 9, 2014
Karoly Boroczky, head of the Department of Mathematics and Its Applications, and Andras Stipsicz, professor in the same department, were awarded the prestigious title of “egyetemi tanar” on September 1, 2014. The appointment was made by Janos Ader, the President of Hungary. The title, which literally means “university professor,” indicates a high ranking within Hungarian higher education. To qualify for accreditation in Hungary, doctoral schools must have a certain number of such professors.