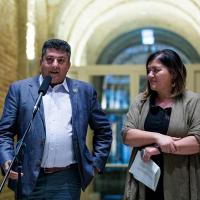 October 24, 2017
Building on a long tradition of supporting Romani scholars and scholarship, CEU launched its new Romani Studies Program in August 2017 and celebrated the launch on October 19. The Program is a new model for international education, a center for study of contemporary economic, social and political challenges as well as a source of support for building open and democratic societies that respect human rights and human dignity. CEU's Roma Access Programs (RAP) was transformed into the Romani Studies Program (RSP) as of August 1, 2017.